We know it’s not perfect, but it’s a huge improvement on the type of medical system operated by the USA, and most Australians are absolutely determined to keep it.
So news out yesterday that more than 900 items that are currently bulk-billed or paid under the PBS are to be scrapped by this cunt of a government will shock many – even those who unfailingly vote LNP.

This has been this government’s agenda all along. Hell, our so-called Health Minister even flagged his intention to de-fund Medicare in his maiden speech. It all fits with their fascist thinking, particularly with Morrison’s strongly-believed view that those who are sick must have done something to upset God, and so deserve whatever they get. Yes, this is a real Pentecostal belief.

Yes, it’s thought he really, really does believe this. No, don’t tell us we’re fucking dreaming, because Morrison’s every action proves over and over again that he deeply holds this core belief.
If you don’t believe us on this one, witches, you need to think again. It’s all true. Yet one of the worrying things about this announcement is we’re having trouble finding information on progressive Australian sites about it. Are they all – including the ABC – cowed into silence by Morrison’s bullying, threatening PMO? So we’re sharing a link from Channel 7, who at least are reporting fairly factually on what’s going on with this:

There’s something real, important and concrete you can do about this, witches. TALK TO AN OLDER AUSSIE VOTER, TODAY. Talk to a pensioner. Talk to a self-funded retiree. ESPECIALLY, talk to someone who votes conservatively.

Why? Because these are the people who should most fear these new changes. The cuts will disproportionally affect older Australians who may need – for example – hip replacement surgery, and will blow out waiting lists to smithereens. Many will be forced to remain in pain from such injuries for months or years longer than they otherwise would have. SCOTT MORRISON DETESTS OLDER PEOPLE AND ISN’T AFRAID TO FUCKING SHOW IT.

Some weeks ago, we asked all witches to talk to an older person about the Indue Card, and Morrison’s plan to put all pensioners on it should he win the next election. Many witches responded that the older people in their lives refused to believe them on that truth, since there’s little concrete proof of it. (Be aware we have no doubt at all it will happen, but it’s true that it’s hard to convince someone sceptical that we’re right.) But on this Medicare issue, the evidence is there in spades. It’s already been announced, and there’s plenty you can say to and show someone to help them realise it’s real.

If nearly every older person in this country who has voted conservatively for many years could see that Morrison hates their guts and intends to destroy their lives, he can NEVER win another election. We’re not saying all older people do vote conservatively – of course, since we have many amazeballs older witches – but it is a fact that older Australians are more likely to vote LNP. If we can get some of them to change, we can reduce the chances that this country is descending into fascist, Trump-style madness.

Who can you talk to about this issue – TODAY?

If you care about your own future and that of others, get on board 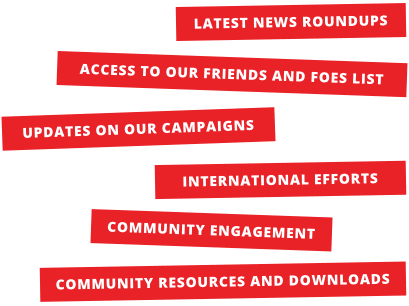 Putting an end to governmental and societal Misogyny in Australia